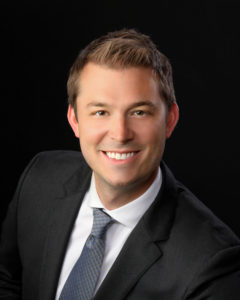 Dr. Dan Drake was born and grew up in the Detroit suburbs of Michigan. Raised in a family of four brothers and a sister,  athletics and competition were always a fun part of the family dynamics.  Soccer, tennis, snow skiing, water skiing, and baseball are just a few of the extracurricular activities he became involved in his community and during his formative years.  He later played tennis at the collegiate level at Kalamazoo College, his undergraduate alma mater.  His major was Biology and he planned to pursue a career in the medical professions. It wasn’t until his junior year he decided Dentistry was a field that fit this mold and allowed him to see patients, work with his hands, and manage an office.  He subsequently attended the University of Michigan for dental school. Dr. Drake’s parents are native Floridians and during his childhood he spent considerable time visiting extended family in Florida. It was the weather and beaches that eventually tip the scale toward him deciding to move there and find an office that complemented his values and skill set. Ormond Beach soon became his new home in 2008 after joining Drs. Kraski and Costello.  The business transition over the years has proven to be very successful as it has given the practice new energy and expanded the scope of procedures offered to patients. Dr. Drake is well known for offering IV sedation which allows patients to sleep while they have their dental work done. Also, he uses state of the art dental implants and surgery techniques for those who want to replace missing teeth.  Furthermore, he has implemented CAD-CAM crown technology in his office which gives patients the ability to have crown work done in one appointment without the need for a temporary.  Of course, Dr. Drake also provides comprehensive general dentistry – from fillings and crowns to root canals, extractions, and dentures. With the exception of only a few specialty procedures, their office is a place where one can receive high quality dentistry throughout their lifetime.

Dr. Marshall Bailey began his studies with a music scholarship to the University of Southern Mississippi.  His fondness of and talent in the sciences, though, ultimately steered him away from music and toward the field of dentistry.  He attended the University of Mississippi School of Dentistry and after graduating in 1995, was able to purchase a solo practice in the town of Long Beach on the coast of Mississippi.  After only 5 years there, the original owner’s son had graduated dental school and wished to purchase his late father’s practice back.  This gave Dr. Bailey the opportunity to move to Florida, a state where he had lived shortly as a child and had always wanted to return to because of its great fishing, boating, beaches and weather!!  After scouring the state for a good fit, he decided on the northeast coast and opened a practice in St. Augustine. This turned out to be a great choice where, while running a busy family dental practice, he and his wife raised two pugs and had many great adventures!  His 26-year long career in dentistry has involved almost all aspects of the field including:  basic restorative, periodontics, pedodontics, prosthodontics, oral surgery, endodontics, implantology, and hospital-based surgery.

In 2019, after much deliberation, he decided to sell the successful practice he had built and put so much into.  This transition afforded him some much-needed R&R – relaxation and reflection!  Realizing that he missed the rewards of dentistry he decided to return to the field part-time, allowing for a balance of life and work.